Monday, June 28, 2021: When you think of professional sports and Barcelona, the first name that springs to mind is the majestic Lionel Messi. This weekend Mr. Messi will take a seat on the bench as the stars of MuayThai descend on the city for what promises to be a sensational showing of MuayThai action.

Golden Stars promotions, the brainchild of Luis Lloret, will stage six WBC MuayThai championship contests on the show, and event which is the ‘talk of the town’ among MuayThai aficionados — the world over.

Two sons of England, George Jarvis and Reece Thomson will look to bring the green and gold back to the UK when they clash with Spanish stars Mouhcine Chafi and Isaac Araya. The Spaniards will not let that happen without a fight — pun intended. 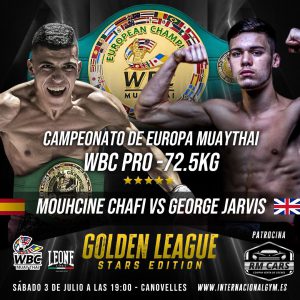 The vacant WBC MuayThai European middleweight title is the prized accolade on the line when Mochcine Chafi clashes with George Jarvis. A possible shot at the WBC MuayThai middleweight world title awaits the winner of this mouth-watering showdown.

Spain’s Issac Araya will finally get his opportunity to face off against England’s Reece Thomson for the vacant WBC MuayThai International lightweight title in a matchup that was scheduled for last year — COVID-19 forced the cancellation of that — we now get to see these forces of fiery nature clash. 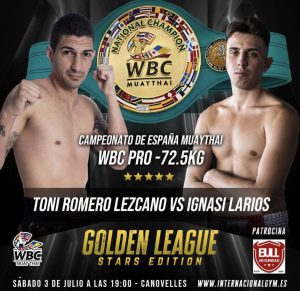 In a clash of opposing styles, Toni Romero will challenge Ignasi Larios for the WBC MuayThai Spanish middleweight championship strap. Will the fire of Romero cool the ice-cool style of Larios, find out on Saturday. 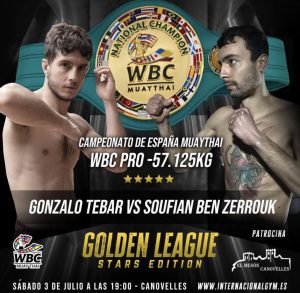 The WBC MuayThai Spain featherweight crown is up for grabs when Gonzalo Tebar squares off against Soufian Ben Zerrouk. Madrid-based Tebar will be looking to bring the WBC glory back to Muay Sapein while Zerrouk, fighting out of Internacional gum, will be keen as pie to keep the title in the Barcelona region. 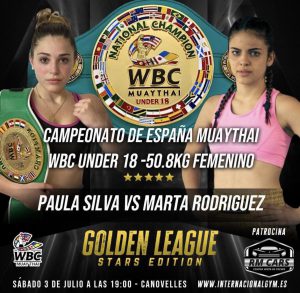 In the first of two WBC MuayThai youth championships on the event, Paula Silva takes on Marta Rodrigues for the WBC MuayThai Spain under-18 flyweight title. Two of Spain’s brightest young MuayThai athletes will be ready to showcase their skills. 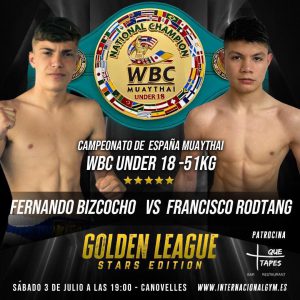 Fernando Bizcocho and Francisco Rodtang will meet in the squares circle for the WBC MuayThai Spain under-18 super-flyweight title, in what promises to be another fantastic showcase of the MuayThai skills of these young athletes.

The show will be streamed live for a well valued €15 http://www.internacionalgym.es on Saturday, July 3.